Melbourne is the capital of the State of Victoria. It is situated on the Yarra River and around Port Phillip Bay with its beautiful beaches and water sports facilities. It is a beautiful spacious city with all the parks, gardens, sporting venues and scenic places that Australian space and natural resources allow.

Melbourne is a world-renowned cultural, artistic, financial and communications centre served by an international airport, a cargo and passenger seaport, and rail links to neighbouring States. Once voted the world’s ‘most livable city’, Melbourne enjoys clean fresh air and beautiful parks and gardens. It is considered to be the shopping capital of Australia and offers some of Australia’s biggest shopping complexes as well as sophisticated, exclusive boutiques and a host of lively and popular markets.

The population is approximately 4 million and is a sprawling city with suburbs extending up to 50km from the centre of the city. Melbourne features world class department stores, historical architecture, theatres, galleries and arts centres. 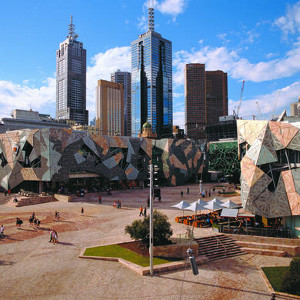 One quarter of Melbourne’s population was born overseas making it one of the world’s most multicultural cities. There are now people from 140 nations living harmoniously together. This broad ethnic mix has brought many benefits to the city including a wide range of cuisines and over 2,300 elegant restaurants, bistros and cafes. Melbourne has an excellent public transport system with trams, trains and buses providing an extensive network throughout the city and suburbs.

Melbourne, a relatively modern city which is less than 200 years old, never sits still. New futuristic designs add to the fascinating mix of architecture and ensure the skyline is constantly changing. Melbourne is very much about lifestyle. It is no huge surprise to residents that their city has been named in an international poll as the world’s most liveable city.

They even embrace their notoriously changeable weather. A standing joke in Australia is that Melbourne can experience four seasons in a day. But, really, it’s just another example of how they have it all!

Sometimes, the best part of visiting a new city is when you unexpectedly depart from the tourist trail and glimpse the city’s “real” side. While the big attractions can be great fun, often it’s the more subtle “insider” experiences that leave you feeling really satisfied. We recommend www.melbourne.vic.gov.au to help you find some inside information to help you discover Australia’s second largest city (also the capital of Victoria).